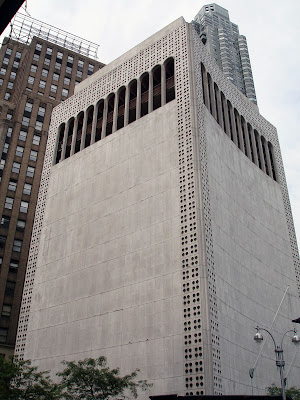 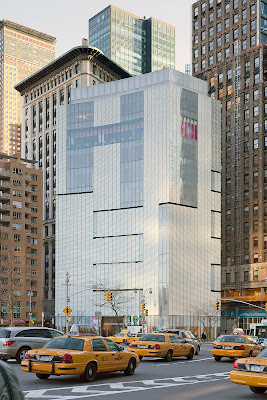 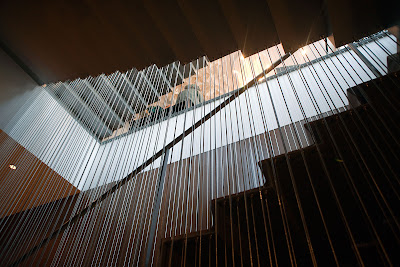 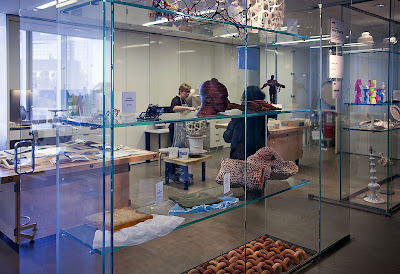 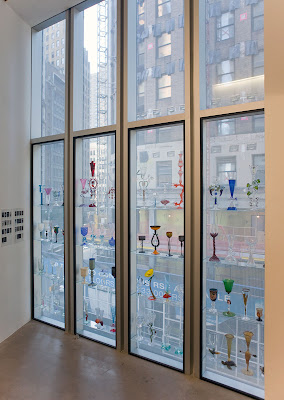 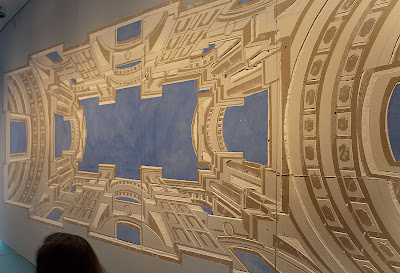 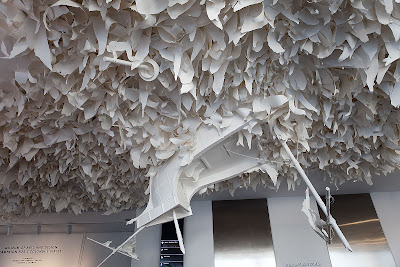 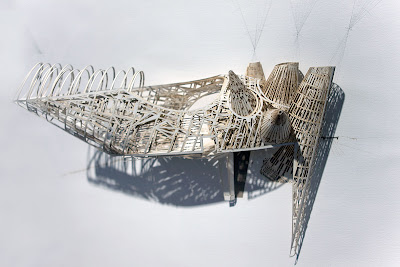 The Museum of Arts and Design in New York (former the Museum of Contemporary Crafts, later the American Craft Museum) moved to a new location (2 Columbus Circle) in 2008. The old building at 2 Columbus Circle was designed (in somewhat Art Deco style) by Edward Durell Stone in the 1960-s. Redesign was done by Brad Cloepfil and his Portland, Oregon-based firm Allied Works Architecture. From the beginning the project was surrounded by controversy. Supporters of preserving Stone's building included such names as d Tom Wolfe, Frank Stella, Robert Stern, Nicolai Ouroussoff, Witold Rybczynski and many others.
Brad Cloepfil was also unhappy, particularly with design changes forced on him by the museum director Holly Hotchner, who insisted on adding a horizontal band of windows (at a restaurant level) connecting two vertical windows and thus creating a letter "H". To some critics, this letter represented Holly Hotchner's egomaniacal ambitions. With a vertical window on the western facade, the building now seems to say "Hi".
When I visited the museum on January 31, 2010, before I learned about its history and the "H" controversy, I found Cloepfil's building quite interesting. Custom-designed ceramic tiles dramatically change colors depending on lighting and viewing angle. I was impressed by the staircase supported by steel cables. But the most interesting for me was the show "Slash: Paper Under The Knife" (will be opened till April 4).
Posted by Vladimir Paperny, PhD at 5:05 PM No comments: 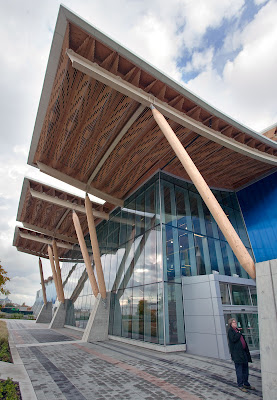 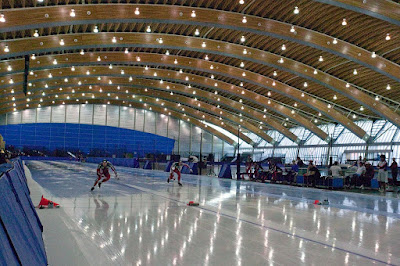 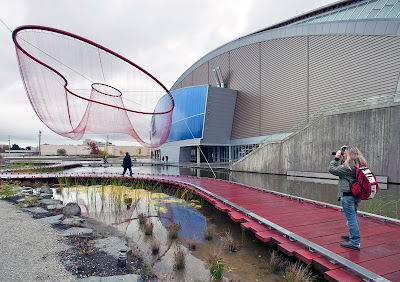 Richmond Olympic Oval, Richmond, BC, Canada. The principal and lead project architect: Bob Johnston of Cannon Design. My photography.
An amazing roof structure!
From Wikipedia: "It has been built on a site beside the Fraser River, a few blocks away from Lansdowne Station on the Canada Line. From the air, it is the first Olympic venue many visitors will see flying into the Vancouver, and the roof takes the stylized native shape of a heron's wing, a tribute to the Salish First Nation and the large wading bird that cohabited the riverbank at first European contact 230 years ago. It is a 33,750 m² facility, including a 20,000 m² main floor that includes a 400 m refrigerated track. It can accommodate 8,000 spectators. The Oval was built to qualify the Leadership in Energy and Environmental Design Scale (LEED) Silver certification; for example, the Oval's refrigeration plant is designed to heat other areas of the building through the utilization of what is otherwise waste heat from cooling the ice surface.
A distinctive feature of the Richmond Oval is its unique "wood wave" roof. This roof, which is one of the longest clear spans in North America, includes one million board feet of B.C. pine-beetle kill wood linked together in undulating sections to create a beautifully rippled effect. These one of a kind wood panels were designed by structural engineers Fast + Epp and constructed at the design build firm StructureCraft Builders Inc. in Delta, B.C. As a result, the Oval was given an award of excellence in architectural innovation by the Royal Architectural Institute of Canada specifically for the innovative use of pine beetle-killed wood in its ceiling."
Posted by Vladimir Paperny, PhD at 11:46 PM 3 comments: 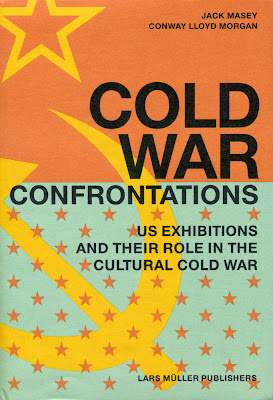 Jack Masey sent me his book (co-authored with Conway Lloyd Morgan) “Cold War Confrontations. US Exhibitions and their Role in the Cultural Cold War”. Jack, as Director of Design at US Information Agency, was in charge of putting together the 1959 American Exhibition in Moscow. The 400+ page book is a goldmine of information on the Cold War era, including stunning (some in color) photos of Moscow in 1959.

In the book, Jack Masey mentions my “poisonous blankets” theory – a reference to a short presentation at the Second Festival of Russian Culture in Las Vegas in 2000 where I said the following: “According to James Shenton of Columbia University, one of the weapons in the war with native Americans was sending them blankets infected with deadly diseases. Abstract canvasses became a new kind of poisonous blankets. Instead of smallpox or cholera, they were infected with poisonous ideology. Jackson Pollock, Jack Masey, Charles and Ray Eames, George Nelson, Buckminster Fuller, as well as the young Russian artists trying to jump the fence at the exhibition, perhaps had no idea of the war that was going on above their heads. But it was. And once again, the poisonous blankets worked brilliantly.”

I believe that it was precisely the Abstract Expressionist canvasses at the show that poisoned and eventually killed the USSR – by wrecking havoc in the minds of young Muscovites, from which they never recovered.

Posted by Vladimir Paperny, PhD at 11:48 PM No comments: 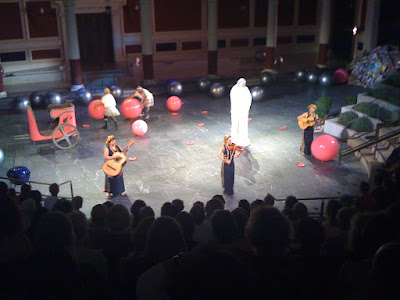 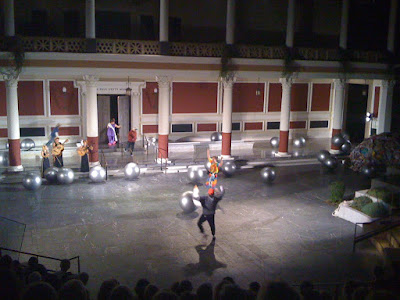 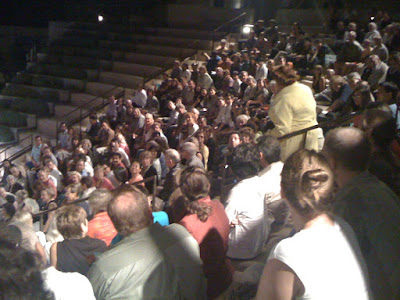 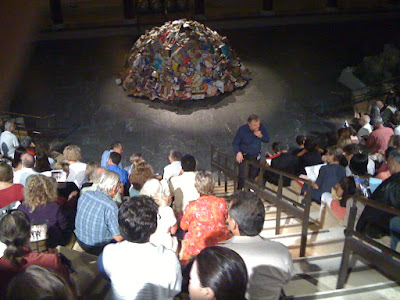 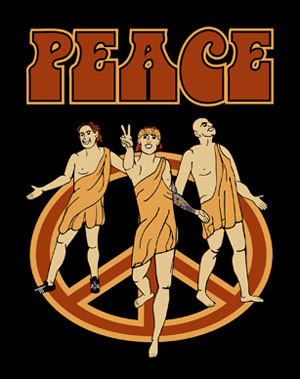 Chicano performance troupe Culture Clash is doing its version of Aristophanes’ Peace at the Getty Villa in Malibu. "Culture Clash," says the program, "collages their performances to bring history, geography, urban excavation, forensic poetry and storytelling together in a contemporary, moveable theater narrative through Chicano point of view".

Low-quality photos were taken by iPhone.

Posted by Vladimir Paperny, PhD at 11:46 PM No comments: 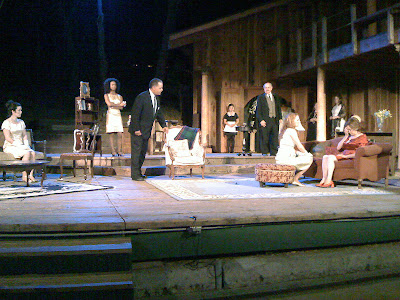 Actor Will Geer (William Aughe Ghere), who died in 1978, was a member of the American Communist party. He was blacklisted in the 1950s for refusing to testify before the House Committee on Un-American Activities. He had had a Masters degree in botany and was able to survive by creating Will Geer Theatricum Botanicum in Topanga, California – a combination of botanical gardens and an outdoors stage theater.

The theater still exists. On August 28, 2009, my friend and I went there to see their version of Chekhov’s Cherry Orchard. What an experience! You drive up the narrow winding Topanga Canyon Boulevard feeling completely lost. Your GPS gives you conflicting signals. You stop at a strange but charming place (a restaurant? a private club? a community center?) and ask for directions. People invite you to join them at their tables. “You are very close,” they say, “another mile up the road. You’ll see a lot of cars parked on the shoulder.”

So, here you are. You are not in a city and not in the 21st century anymore. “How can I help you?” asks a friendly woman in a wooden shack with a sign “Box Office.” “I made a reservation online,” you reply not sure if these words have any meaning here. But you are wrong. She quickly finds your name and gives you your tickets. “Walk across this old wooden bridge,” she explains, “turn right, and you’ll see the stage.”

You walk among dimly lit exotic plants (Will Geer made sure he had every plant mentioned by Shakespeare), you pass by the snack shed, then by a table with brochures and photographs, and then you join a small crowd at the entrance to the theater. “It must be your first time here,” says a middle-aged gentleman (now that the middle-age has shifted to the 60s), looking at my friend’s white pants. “You better rent those cushions over there, just a dollar a piece. These benches are not very comfortable.”

We are sitting on the cushions in the first row of this auditorium where everything, not just the stage, looks like stage decorations. Birds are singing. Dogs are barking. Mosquitoes are buzzing. Is it all real or recorded? The woman who just gave us the cushions appears on the stage wearing a t-shirt, striped pajamas pants and flip-flops. You expect her to start something like Nina Zarechnaia’s monolog on “people, lions, eagles and partridges” but instead the woman makes a few announcements and leaves. The lights go off and the play begins.

Chekhov’s comedy (as he called it) was rewritten by Will Geer’s daughter Ellen and Heidi Helen Davis, who directed it. Ellen also plays Ranevskaia, who is renamed here Lillian Randolph Cunningham because the play now takes place in Virginia in the 1970s. Lopakhin, who in Chekhov’s play was a son of a serf, became Lawrence Poole, a descendant of black slaves. Lawrence advises Lillian to cut down the cherry orchard to lease the land to developers who would build shopping malls. The eternal student Petia Trofimov became an angry black activist Terrence Moses, who is denying being in love with Anna (one of the few characters to keep original names) played by Will Geer's granddaughter Willow. The old servant Firs, locked and forgotten in the abandoned estate, became the old black woman, a kind of Mammy from Gone With The Wind.

Surprisingly, this transplant worked, which only proves universal and timeless qualities of Chekhov’s masterpiece.

Posted by Vladimir Paperny, PhD at 6:09 PM No comments: 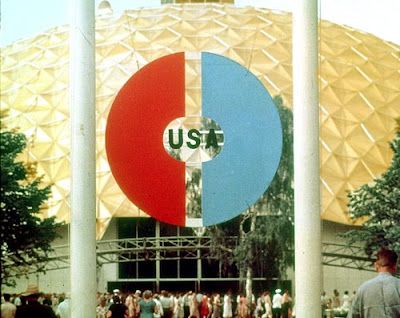 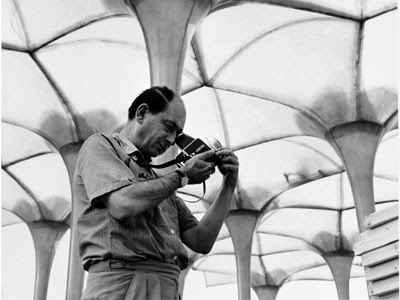 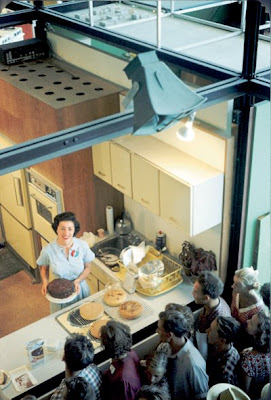 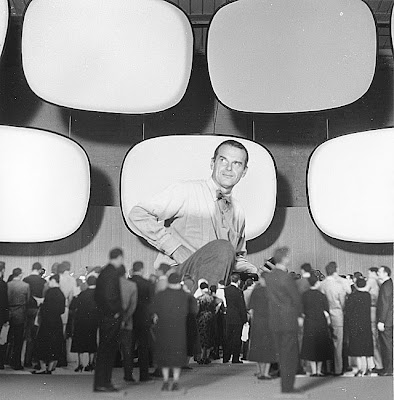 Chronicles or Times? That was the question.

Here is my exchange with Valentin Diaconov regarding the name of this blog.
VD: Imagined a blog titled The Paperny Times.
VP: Why is Times better than Chronicles? Maybe I should change it to Chronicle so it doesn't sound like The Chronicles of Narnia and more like San Francisco Chronicle.
VD: There's a pun in The Paperny Times: it's both a newspaper and an era we live in. Remember that joke: "Brezhnev – a minor political figure of the Alla Pugacheva era."
Valentin, you have convinced me. I am changing it!
Posted by Vladimir Paperny, PhD at 1:11 PM No comments: